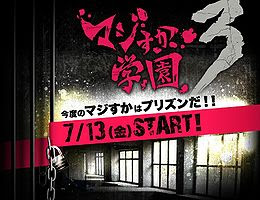 “Year 20XX. With the reform of the juvenile law, private prisons are born. Dangerous delinquent young girls, abandoned by society, school, and even their family, are gathered there. The detention period is unlimited. A battle ring where only the fittest survive. That is what you could call Prison HOPE, also known as Majisuka Prison” (Taken from intro).
Paru (Shimazaki Haruka) was one day brought to Prison HOPE, a correction facility for delinquent girls. The problem is, she has no memory of why or how, only short flashbacks. The guards and the inmates don’t make it easier for her; the only person that seems to be nice to her is Peace (Kizaki Yuria), a weak girl and her roommate who is somehow an outsider in the quarter ‘Habu’ where Paru is put. In Habu there are all in all 8 girls, where the leader, Nobunaga has left them for some unknown reason leaving the top spot vacant. The Habu quarter is split in two, by the two strongest after Nobunaga: Urusayo (Shimada Haruka) a strong girl and Daasu (Oba Mina), Nobunagas friend.
After Paru’s entrance, the Habu as well as the rival gang ‘Mongoose’ get shaken up big time, even though Paru only cares about finding about a so-called Keita…

Lol, I can’t explain my rating. There is just something about these girls beating the shit out of each other that I enjoy (It’s not the hitting part, It’s just the way they seem to be fighting for whatever they love with their bare hands that make me so linking it - a bit like CROWS 0). The acting was bad, occasionally good by some actors. The plot was silly, better than the other and lastly the involvement with the “other people” - meaning not just the girls from the school - made it more interesting. To sum up, only watch if you watched the other 2 seasons, it gives you a new breeze of air, or whatever..