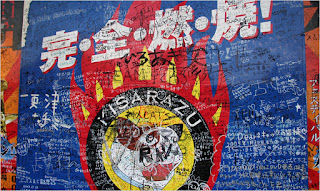 This drama is about 5 baseball loving friends going all out after they find out that one of them is dying. Tabuchi Kohei (Okada Junichi) also known as Bussan is a catcher for the second team of Kisarazu Cats. He with his friends is known to be extremely good at it, except for the fact that due to a mistake 3 years ago they weren’t able to go to Koshien. The mistake was a misunderstood signal and led to the fight between Bussan and the pitcher Nakagomi Futoshi (Sakurai Sho) aka Bambi. The two were classmates, but ever since that incident, Bambi has been ignoring Bussan. Bambi is a university student, also the most intelligent one, which all of them agree on. After every game they go to the bar owned by another player Okabayashi Shingo (Sato Ryuta) aka Master, a housebound and father, with child number three on its way. Sasaki Kizashi (Tsukamoto Takashi) aka Ani, is the older brother of Kisarazu’s star Sasaki Jun (Narimiya Hiroki), also the reason for the nickname ‘Ani’ short for Aniki. He is bit of an idiot, and constantly judged, especially because of his lack of success - be it job ot baseball. Lastly we have Uchiyama (Okada Yoshinori) aka Ucchie; a senpai, with a mysterious family, especially since no one knows where he lives and what he thinks. He is weird, and never speaks much: somewhat of an airhead.
After Bussan drops the bomb of him dying, he gets crazy ideas and plans crazy things, like stealing cars and selling them or form a band. These experiences bring them closer together, and eventually bring up fear in the friends hearts. Their friend only has three months to live…

If it weren’t for Sakurai Sho, I wouldn’t have watched it, now that I have, I gotta admit, LOVED it! The thing about old dramas is if you can follow the flow, you will like the drama, and I did. It didn’t make sense most of the time, number one because it’s typical boy stuff they do and second, well I have no idea what these guys are doing… The thing I liked a lot, was about the illness and actually how seriously the illness affected the other people, but of course its comedy so they had to make it funny. Okay, to sum up, the drama is ok.