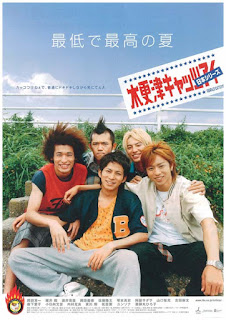 One year has passed since Bussan (Okada Junichi) has been told he had 3 months to live, and is told once again that he has 6 more  to go. For some reason every time he goes to the hospital he is told differently, and it has now become a topic that Cat’s Eye find boring. After the surprising return of the dead Ozzy, oldie Rose’s pregnancy, Bambi’s 2nd unwanted election win, a rock concert where the members have to sing at and a Korean bar that is opened, things become even more hectic in Kisarazu. Bussan falls in love with one of the bar girls Yukke is noticed by Bussan, and he falls head over heels in love with her. By that he decides to marry he and asks the help of his friends to help him…

Omg, really, like this is one crazy movie.. I love it, but still, omg.. It’s a lot like the drama, and the comedy has risen, like almost ridiculous, yet enjoyable. The thing that differentiates it is that the characters are a bit sillier than what they used to be, but still the movie has a bit of every episode in it, which I loved by the way.
These 5 guys are like crazily funny and annoyingly real troublemakers. The movie is not so good if you havn’t watched the drama, so that’s a must :)