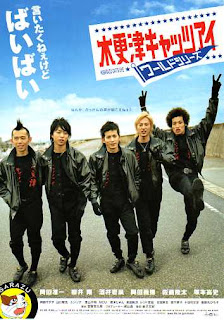 Three years has passed since Bussan’s (Okada Junichi) death, and the Cat’s Eye have split; Bambi (Sakurai Sho) has become a government official and broke up with Mohko, Ani (Tsukamoto Takashi) is in Tokyo “having an IT job”, Master (Sato Ryuta) lost his busniss and wife, and now lives in Osaka and opened a Yakyukyo Shop, and lastly Ucchie (Okada Yoshinori) is nowhere to be found.
One day Bambi goes to a site and hears a voice, and he immediately thinks its Bussans. After he hears it the second time he decides to go get Ani and Master, who have fought due to a failed attempt to steal like Cat’s Eye usually do, which leads to unbelievable events…

Okay the resume is a bit silly, but out of the Kisarazu Cat’s Eye stories this is defiantly a fave, even though its completely ridiculous. The characters have really grown, and their acting has improved a lot. But I like how it ended, I mean the way they finished the story (even though it’s extremely silly.) If you watched the drama and first movie, the last movie is the perfect ending.