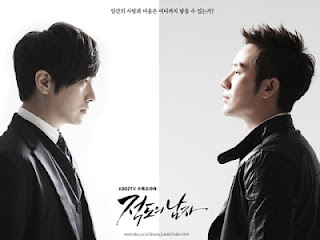 Jang-il (Lee Joon Hyuk (young: Siwan)) is the smart kid at school, with the dream of becoming a prosecutor to protect the weak. One day he faces some trouble, as dept collectors come looking for him at school. Unexpectedly the strong kid at school Seon Woo (Uhm Tae Woong (young: Lee Hyun Woo)) saves him. As Seon Woo gets into trouble Jang-il is too be his tutor, but Jang-il soon finds out that Seon Woo hasn't been taking advantage of his potential. The two of them develop a close relationship, one where they would do almost anything for one another, almost. Their friendship comes to a test, a test strong enough to tear them apart. Seon Woo's father dies a mysterious death, which police claims is suicide. But that just doesn't make any sense to Seon Woo, and he starts investigating. On his way to the police station to submit the proof for his father’s murder, he meets Jang-il. To whom he shouldn’t have turned his back on. Jang-il prevents Seon Woo from going to the station by as very last resort attempting murder. Now he has so live hiding a secret which is eating him up from inside, something which has torn the two friends apart. Several years later, Seon Woo will build his power up from scratch, trying to  find out what really happened and seek revenge. Revenge on a friend.  You will be surprised.

This drama is the next big drama, so amazing I was glued to the screen for 20 episodes. Amazing tension and it's got you from the start. I loved the part where they were kids, loved the little Seon Woo SO much! Everything about him, so cool. Jang-il on the other hand, I seriously couldnt watch. I was so sick of him and even made me hate the actor, I guess he is that good at acting? or what? I was really surprised by Uhm Tae Woong, I had not expected his acting to be THAT good! Maybe because I wasnt that happy about him in that one movie I watched. Here on the other hand.. WOW! so nice, the acting, and his charactor. The love stories, which I havent mentioned, I wasnt too happy about it, I hate those stories with "I must have you, cant live without you"-stalkerish kind of , not crush but like really.. like a crazy person. And its like, the girl from their childhood likes Jang-il but he is disgusted by her because of her father? or because she isnt from at well-off family. And Jang-il likes(like crazy person) the girl who likes Seon Wo and whom he likes. I really hate that kind of thing but I guess the drama is so good I could bear with it. But it made me hate the actor, I dont remember him this annoying in City Hunter. Seriously if you like the action, tension, drama, with sweet love and great actors, this is for you. The revenge part is so good! Wow-mazing!

Bunji's Verdict
I guess 2012 was the year of good dramas, because Equator Man defiantly is on that list of great dramas. It has great actors, good screenplay, good chemistry between actors and great dialogues. Though I have to say, the revenge part was crazily deep, so I actually for the first time felt like the lead became crazy because of it. Usually you see them scream, and act like madmen, but this guy seriously became mad. Like, I was scared.

But the bad part was the length and the fact that the only thing this drama is about is revenge. Okay yeah there are many, but you really don’t have time to breathe in the entire drama because of the tension, and the fact that you actually know why and how everything happened, but the lead doesn’t. So the entire drama is about waiting, waiting for things you already knew happened happens. Of course except in the beginning where you get to know the stuff, that the rest, I don’t know how many, episodes are about. It did take me some while to watch this, I started this before Jenji, can you imagine, but couldn’t end it.
I do recommend those who enjoy the entire “justice” part, and also if you like the “back to your own place” thingi…
☆☆☆☆ / 4 out of 5 stars