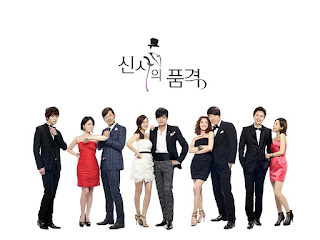 This drama revolves around four successful best friends in their 40’s, and how they deal with life, family and love. Kim Do Jin (Jang Dong Gun) is a director of architectural firm and is the ultimate bachelor out of the four, until he meets Seo Yi Soo (Kim Ha Neul), an ethics teacher at an all-boys school. The two have an embarrassing meeting, and that leaves an impression on the playboy. But little does he know that Yi Soo happens to be in love with Im Tae San (Kim Soo Ro), one of Do Jin’s friends and his firm partner, and the boyfriend of Hong Se Ra (Yoon Se Ah) Yi Soo’s roommate and best friend. Tae San’s little sister Im Mae Ri (Yoon Jin Yi) is in love with Choi Yoon (Kim Min Jong), another of the four friends who lost his wife a couple of years ago, so he became the one in the group that they all took extra care of during that time. He is a lawyer, and no matter the situation he would help his friends in need, also the reason for him being the lawyer of Do Jin and Tae San’s firm. The last one of four is Lee Jung Rok (Lee Jong Hyuk): he is the younger housebound of the billionaire Park Min Sook (Kim Jung Nan) who married him for his looks. The two have constant fits, due to Jung Roks infidelity and Min Sook’s jealousy, and it usually is the three friends that make alibies for him, because she owns their businesses.
Their lives suddenly get twisted after a young man named Colin (Lee Jong Hyun) arrives…

It’s been a while since I’ve seen such a nicely written screenplay, makes me all teary. The dialogues, the storyline, and the acting was pretty amazing, and somehow they turned out to be much more than the usual Korean drama (or any drama at all). While watching, I was reminded of the drama ‘Secret Garden’, extremely enjoyable, and to my surprise it was the same writer. The difference is the acting ability: if secret garden is a 10, “A gentleman’s dignity” is a 15. Good acting + good screenplay = enjoyable tv-time :P
Even though it’s different, funny, cute and romantic, it ended up, like in Secret Garden, being just a bit too long; with the extra episodes of ‘should we be together’, but still good evolvement and very interesting. Recommendable!

Jenji's Verdict
This drama is actually quite different from many of those I've watched. So it was a "mature" drama, since the male leads were in the 40's which was really fun to watch, also because it's about these four guys who have been friends since high school and seeing their relations and so. Really funny and I actually liked pretty much all couples, all of them funny and special. My favorite was Yoon and Mae Ah Ri, I was supporting them all way through hahah, and I liked how they all evolved, and changed. I just didn't like Kim Do Jin, not sure if it is because of the character or the actor. I think the actor maybe. I just reeeeally didn't like him. But I survived. I actually only feel like it was a bit too much with Kim Do Jin and Seo Yi Soo, the others were pretty fine. So really not many complaints. Very different from what I am used to and I liked it. Recommend it really!