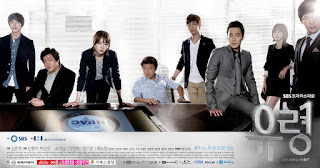 This drama revolves around the Cyper Squad in the Korean Police. Kim Hyun Woo (Soo Ji Sub) is team leader of the cyber squad, and is searching for the infamous hacker Hades. Little does he know, the hacker is ex-cadet and his old roommate, Park Ki Young (Daniel Choi). While the two are going head to head, the famous actress Shin Hyo Jung (Esom) dies in from a fall, out of her apartment window. Everyone believes its suicide until Hades uploads a video for the world to see, how someone pushes her out of the window. Shortly after the evidence start to point at Ki Young, and for some reason Hyun Woo doesn’t try to find the real murder, even though he knows Ki Young is innocent…

Hmm, I tried not to give much away, but the drama is more exciting than what I’ve written. Basically it’s a police action drama with a corrupting topping. I really enjoyed it, almost every bit of it, and even though it does not have any romance in it, which for me is unusual to like, it was pretty brilliant. So Ji Sub can’t be compared, I love him, but I didn’t like his leading lady, or whatever you could call her… Not the greatest actress. G.O was a nice surprise, though you can see that he isn’t very used to acting. Kwak Do Won was great, probably one of my fave, as the hot headed police officer. All in all, a great drama, defiantly recommendable…

This drama seriously just blows your mind. It get more and more complicated and so many things happen that just leave your jaw hanging. Too many times I had to check whether it was the end of the episode because it was so extreme, and extreme things usually happen at the end of each episode. It really is a drama that gets you thinking all the time “What? Why? How? OMG what’s going on! Can’t be true!” it’s one of those.. And I really liked the actors, I think it was my first time seeing G.O act, it was decent. Not bad at all. And So Ji Sub,, daaayyuuum! That guy! Like when watching him talk sometimes you get so absorbed and you just admire what a great actor. Good looking, charismatic. All. I think all the actors did a great job. I’m really wondering why it didn’t get as good ratings as some other dramas, wondering if the Korean watchers don’t like that genre? Only melo dramas lol. Anyway.., at some point it did actually get too much for me, around ep 12, I was kind of slowing down, it was getting too much, but when I continued later I couldn’t stop! And the ending was really good, and I don’t know how but I felt bad for the “bad guy” in the end :/ This is about revenge going too far and trying to defeat hate with hate, or more like fighting the rich power-thirsty people by becoming just like them. And about the importance of police officers doing what they have to do being a “good police officer”. Doing their duty.  And of course we love hacking lol. It almost makes you want to become a hacker hahah! I’m just like “cooooooooool!” “awesoooome” and then it’s even So Ji Sub as a hot hacker lol. Hahah, enough from me. Like hacking? Mindblowing dramas? This is the one for you baby!