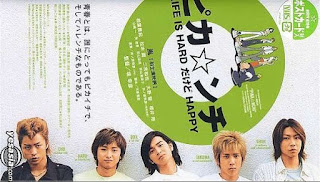 This movie revolves around 5 high school students, who live in the Yashio Housing complex in Shinagawa. What’s special about it is that even though it’s big and has all the necessities, it’s not really part of Shinagawa city, and is linked by only two bridges. The 5 students are friends from different homes, and statuses; Futaba Rentarou ”Bon” (Matsumoto Jun) living in the wealthy part of Yashio and his father is the owner of a restaurant, but does not act superior because of that. He is simple- and open-minded to everyone and everything, and always has a smile on his face. Takada Haruhiko ”Haru” (Ohno Satoshi) is known to be the most unlucky guy in Yashio, also works hard to earn money since he lives in the part of the average houses. But due to his unfortunate and rather spaced out nature, he’s most likely to wind up without any of his earnings. Okano Shun (Aiba Masaki) our narrator lives at the same complex as Haru, and is as average as he could be, except his father is the radio DJ of the surrounding place.  Kamogawa Tadashi “Chu” (Sakurai Sho) is a Yankee living in the bad part of Yashio, where he is the leader of a smaller bike gang. Lastly there is Onda Takuma (Ninomiya Kazunari) living in poor part of Yashio. When he first started school the rest thought of him as a stuck up kid, since he always has the newest of the newest stuff, they soon realize that he was shoplifting, and he ends up becoming their leader.
After the group try to go to Harajuku - the ‘big city’ - they all encounter different situation, which leads them all to start to think about their future…

Hmm, I think you could call this a Japanese answer for American pie? Haha, okay maybe not completely, but it sure is funny. At first I was thinking that it’s pretty ridiculous, but somehow it grows on you and the characters somehow have an effect on you. All four boys are completely mad, and instead of being disgusted, I laughed and went “That’s such a guy thing!”. So I just let go, and became open-minded, and joyed every part of it. It’s not really the most interesting movie, but entertainment wise, good.