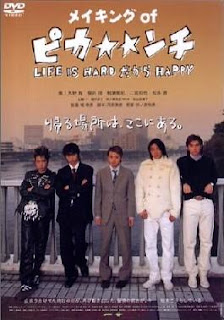 It has been three years since the group had split, and the leader finally returned to Yashio, but things have changed; not only is the housing complex where Takuma (Ninomiya Kazunari) used to live about to get demolished, but the rest have changed drastically. Haru (Ohno Satoshi) and Bon (Matsumoto Jun) got into a disagreement about the demolishing of the complex which they had been fighting hard to keep, so that Takuma could have a place to return, which leads to Bon leaving Yashio, and Haru joining the demonstrants. Shun (Aiba Masaki) almost fell into depression after failing the Aoegaku University entrance for the third time, but found peace at a crochet school. Chu (Sakurai Sho) on the other hand settled down: got married and has a kid, so he started as a sales man in order to feed his family.
All have problems of their own, and they soon realize that life is tougher than they imagined…

Different from the first one, this one is about the gang being ‘grown ups’, and that itself is pretty funny. But the movie is not that great compared to the first one, mainly because the storyline only has one focus, whereas the first one had several. Or that’s how I remember it. Still it’s enjoyable, and the boys are as cute as ever, hehe..