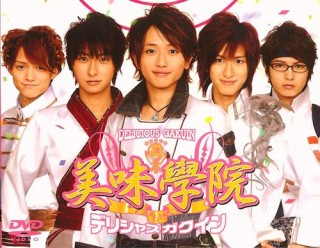 
”Delicious Gakuen.  A place far from people, built deep in the mountains. A cooking school built to create the best chefs in the world. It is a boarding school with gender-segregated classes.  And for the 3 years from entering the school until graduation, leaving the school grounds is forbidden. However, only those who can defeat the principle and Delicious Shintennou (teachers) in a cooking contest will be allowed to graduate early.  The students are undergoing difficult training in order to become the best in the world.  But, the facts about the school were shrouded in mystery.”(Taken from the intro of every episode)
Kitasaka Rouma (Nishijima Takahiro) a bum that steals food and walks around with a frying pan, Takasugi Rin (Aiba Hiroki) a rich kid that is fascinated in everything beautiful and makes jewelry, and Matthew Perrier (Miura Ryosuke) a half-Japanese half-French rich brat that has never had any hardship in his life, one day get kidnapped and wake up in a classroom bound together. Even though hungry and tired, the three manage to get rid of the ropes, but end up in a room where they meet four teachers of four different cousins, French, Italian, Japanese and Chinese. They are told that they are enrolled in the school Delicious Gakuen, and that they cannot escape unless they beat the four teachers and the principle in a cooking battle...

Lol.. That’s the only word I can come up with. It took me at least 3 years to watch this drama, because of the subbing process, and all I can think of is, LOL! But I sort a fell for Nishijima Takahiro in this one, that must be the reason why I liked him in the other dramas as well. He is the only out of the bunch who knows how to act, the rest were pretty ridiculous. And the storyline omg, silly. BUT, but but! It’s enjoyable. Really fun, and silly omg! Wouldn’t recommend it, but like 13 episodes of 20 min? Who wouldn’t be able to do that? Hahah…!