In His Chart Movie Review 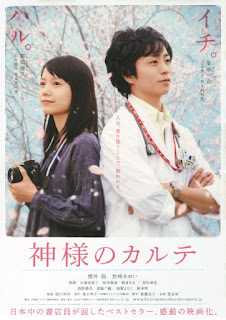 Title: In His Chart

Kurihara Ichito (Sakurai Sho) is a doctor who is known to take in every single patient that comes his way, he simply never turns down anyone in need. At the hospital everyone knows that if he is on duty, they’d expect a full emergency room. Even though he is talented and refuses to turn anyone down, he still feels he is lacking, or not doing his best at times. When an opportunity to visit a university medical hospital arises, he takes the offer and leaves the hospital for a week. There he is also offered a job, since the doctors seem to notice him, leaving Kurihara confused whether he should take the offer and become something more than just a doctor in a small town. At the medical hospital he meets a 67 year old woman, Azumi Kyoko (Kaga Mariko) diagnosed with cancer. He, as detailed as he is, writes a chart about her. That chart is sent to Azumi who is touched by it, and decides to go the hospital where he is employed.
The story follows Kurihara life at home and his confusing whether or not he should continue what he has been doing so far, or going further and becoming something more…

Wow, okay, this movie is heavy, not HEAVY heavy, but it aint light! It’s a serious movie, about being a grown up and the fact even though you are more educated than other, even though you earn more than others, and even though you finally got your dream job, it all does not ecual happiness, until you make it your own. I think Sakurai Sho is amazing when it comes to serious dramas/movies, and I’d rather watch his doing these serious characters than those who are just silly.
Anyhow, I think I would recommend this, but no action at all nor humor, so don’t go there if you want that