I Give My First Love To You Movie Review 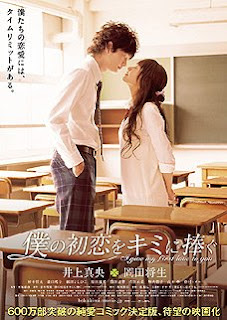 
Kakunouchi Takuma (Okada Masaki) was diagnosed with a heart condition at a very young age, and has been in and out of the hospital several times. As a 8 year old, he met Taneda Mayu (Inoue Mao), the doctors daughter of same age, whom he had befriended and since then been very with. He happens to find out, by overhearing his parents and the doctor that he probably won’t live to see his 20th birthday.
Years pass, and the two are now dating and completely in love, but after Takuma’s seventh admission in the hospital he decides to break up with Mayu,  afraid of leaving her heartbroken so he starts to distance himself from her..

My reviews keep getting worse and worse, anyhow, if you sort a understood my summary you’ll see it’s a romance :P lol, joking.. This movie is a pretty good story, even though very typical, it somehow has a nice feel to it. The couple is nice aswell, and they sort of fit one another. The acting was neat too, so was the screenplay. There were some moments that just made you lose focus, like the story just didn’t seem to have a direction, and when it finally had one, it only lasts for a couple of minutes. It has a lot of sweet moments though, so it’s not all bad… I would recommend :)