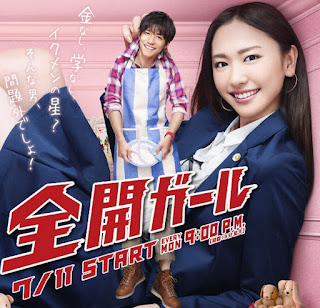 Tagline (English): No money, no education, a star of good-looking guys? A guy like that is out of the question, right?
Genre: Romantic comedy, Family
Episodes: 11
Broadcast period: 2011-Jul to 2011-Sep
Ending song: Tsubusa ni Koi by Kanjani8
Cast: Aragaki Yui and Nishikido Ryo

Ayukawa Wakaba (Aragaki Yui) has since young dreamt of being not only rich but strived to be number one in everything. After getting top score in the finals in law school, she had been admitted to one of the biggest law firms in Japan: only to find out it is going bankrupt. Frantic, and unable to believe that she, Ayukawa Wakabe, doesn’t have a job, she starts to make calls. In a state of panic, she is soothed when she gets a job offer in another large firm. When she arrives she is accepted, only to find out it is as the nanny of the chairman’s 5 year old daughter. Unable to be left defeated and afraid of being jobless, she accepted, in hopes of getting the chairman’s acceptance. Already in the beginning she is met with hostility from the girl, who seems a lot smarter than her average age. In the kindergarten she meets Yamada Shota (Nishikido Ryo), a kind hearted and good looking guy, who is the full time dad, of a 5 year old boy in the same kindergarten. This meeting destined meeting changes both of them, in terms of dreams, hope and love…

Most defiantly one of my favorite dramas so far! I did enjoy every minute of this drama, even though it has ALL the typical clichés, it somehow has greatness over itself. I can’t really explain it. Somehow real? All the relationships, the scenes, and the dialogues were authentic somehow. It has a  fresh feel to it, even though I kept thinking of Nishikido from his drama ‘Last Friends’, but he manages to shake it of him, in a way I became ‘Nishikido'd’, hahah.. Absolutely love it. I mostly recommend it :)