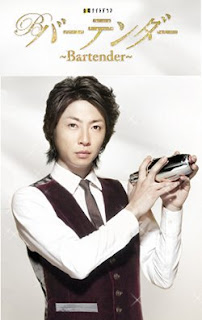 
As her grandfather is her only family, Kurushima Miwa (Kanjiya Shihori) grew up having a strong bond with him. Since he is a head of a newly opened hotel he has been teacher her divers things, such as how to manage a hotel and how to deal with the bussniss, but the one thing he has had biggest pride in is the main bar. He loves liquor and has told Miwa about ‘The God of Glass’ which is the one glass that can make a person forget all his loneliness and sadness. His wish is to find a bartender able to make such a glass and put him as the main bartender in the main bar. This wish Miwa wants to make come true.
She herself is a journalist who writes about drinking spots, for woman who look for them. As she one da finds a possible bartender, Sasakura Ryu (Aiba Masaaki), maybe able to make The Gods Glass, she finds out he is no longer a bartender. When she by accident bumps into him, and convinces him to return to the bartending world, and his first mission is to make a drink to Miwa’s grandfather, who is not easy to please. The drama follows Sasakura Ryu and the guests who enter the bar he is working at…

It’s a good drama it’s just I have zero interest in liquor.. Like you know, they talk about it, and like share emotions, and I’m like “really?”. But Aiba was great in this, seriously, like he has grown, and it felt real to me, sort of natural watching him. Though it was kind a fun seeing him do the shaking part, you know when they mix the stuff and look away shaking the mixture, yeah, so funny…tihihi,,, Oh yeah, and I wonder what it is, but he kind a looks hot in the apron, or is it just me...
The storyline was not that exciting, but it was sweet and if nothing else, just watch it for Aiba :)