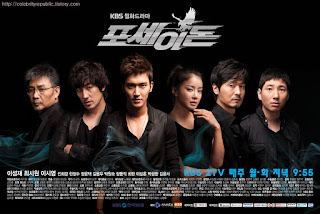 
Lee Soo Yun (Lee Si Young ) became a coast guard officer after her father goes missing, and dreams of finding out the truth of his dissapearence. Kim Sun Woo (Siwon) is MPCO in the Korean coast guard, after being degraded from the special force unit for an incident that lead to his co-workers death. Kwon Jung Ryul  (Lee Sung Jae) is a CO also of the KCG, he lost his wife in a similar case as the one of Sun Woo where the coworker had the same tattoo mark on her chest as his wife.  That tattoo is known to be from the infamous Choi Hun Goon, the leader of the black trade almost like a ghost. Everyone getting close to him ends up being murdered or disappears.
When Jung Ryul   fails a mission by mistaking a ship for CHG’s ship, he is called up by his boss, who tells him to make a team of police officers that are going to be under the section 9; unit for  unsolved cases. But in reality it’s a section for the search of CHG. The tomboyish and rude Soo Yun, and the Casanova and pretty face Sun Woo get to work together: even though they didn’t see eye to at first, they somehow evolve as partners…

Hmm, I usually like Korean police dramas, they somehow have intrigue and character, but this was just boring. I was yawning most of the time, and even the action, the corruption and the love story didn’t get my attention as it should have. I can’t really put my finger on the reason, but somehow it just became a bad drama. The lead actress was infuriating me, like if you can’t rely on someone else don’t talk big, seriously. And somehow Siwon wasn’t able to overcome his looks, somewhere in the drama I went, oh good acting, but suddenly he would change, and I would get annoyed. As I said the love story was way too shallow, they should have just left it as friends, like it felt like a teenage push and pull game, dumb really.
On the other hand, it has funny moments, where I laughed, Siwon is hot and the story somehow gets your attention, but you’ll lose it with ease, or I did anyways. So if you want light version of the police confusion, this is your pick.