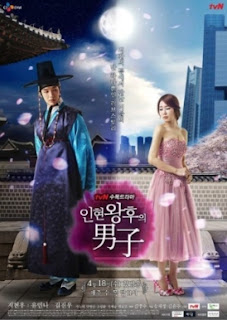 1694: the 20th year of the reign of Joseon Dynasty's King Suk Jong.  The Queen, In Hyun was dethroned by the king, and lady Jang Ok Jung was crowned as the new queen. All those against it, were tortured. But due to her tyranny and the peoples request for her return, the king had another change of heart. Queen In Hyuns reinstatement was planned in secrecy, but the Right Deputy Prime minister Min Am took a note of it. Thus began the conspiracy for the assassination of Queen In Hyun, but she was managed to be saved by  Gim Bung Do (Ji Hyun Woo) who under the order of the king has to help her. This is found out by Right Deputy Prime minister Min Am who orders his assassination. At the verge of death, he suddenly disappears, leaving the assassin in utter confusion. Bung Do wakes up in present Seoul, where he is met with modern technology, and he meets Choi Hui Ji (Yoo In Na) who mistakes him for a fellow actor.

Hui Jin is a bubbly girl who dreams of becoming an actress, and when she is chosen for the lead role of Queen In Hyun in a drama, she is more than ecstatic. Her only problem is that her ex, now a huge Hallyu star is opposite her in the drama, who not only provokes her, but plays with her.
When the two meet for the second time, he happens to kill a man in front of her, making her faint. In the confusion he loses his talisman, the one that makes him jump through time. Now he has to find her to get it back…

This drama is almost perfect! Like, a realistic reason for two people not to be together (even though it’s fantasy), amazing chemistry, great action, and never a dull moment! Though I have to admit I was confused when it was about the political and historical stuff, had no idea what they were talking about, but on the other hand, it was great, not really draggy. I fell in love with both leads; she was way adorable and he was kind of cool, complete opposite from his ‘Mr. Idol’ movie. The humor was good as well, and the relationships, no confusion there or annoying ‘two-way-love-stories’. It might be historical incorrect, and somewhat weird when it comes to the time-travel, but if you are able to look passed it, you would be able to enjoy it : )

Jenji's verdict
Seriously I don't know if I have anything bad to say about this drama. It's like a perfectly made  portion with just enough of everything, not too much of anything. The couple was perfect as well! He is so charming and cute and everything and so is she,  I really liked her too, she was so cute but not like "argh.." cute. She's just lovely and you cant hate her or anything. And he is like so perfect and "old-type-good-man"-ish. Like those real man MAN.. And there was just enough excitement it wasnt something you would get tired of. And thank God! there wasnt any annoying messed up relationships, I even liked the second lead! (not sure why though lol) . But I really agree with Bunji about the beginning, it was a bit confusing, but also probably because I did no backstory chech or anything. Anyway, reeeeaalllyy cute, lovely romance drama, I really really enjoyed it. I dont see any reason why not to give it 5 stars compared to other 4 star dramas. >.<