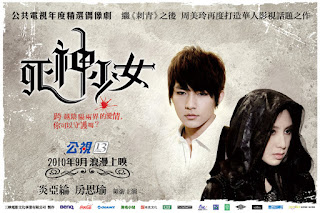 Title: Gloomy Salad Days
Tagline: Dear death, please take away my misfortune, even if the price is for me to turn into a stone...
AKA: Death Girl
Genre: Human drama, supernatural
Episodes: 20
Broadcast period: 2010-Oct to 2010-Dec
Cast: Aaron Yan and Serena Fang (and many many others...)


This story revolves around several students’ lives and how they come across Du He also known as Death Girl (Serena Fang) guardian of the ‘Bridge of Helplessness’. Every student has something part of their lives that they hate to the point of helplessness: that is where Death Girl comes in.
They can only see her with the black stone, and with that they are also able to summon her. They can request something from her, but if they still don’t overcome their helplessness they will become a part of her bridge as a rock.
Shen Qi (Aaron Yan) has the ability so see Death Girl even without the black rock, and tries to warn every student he sees talking to her, but the matter of the fact is that everyone thinks him as weird because of it. He eventually starts to fall in love with her, and beings to understand the meaning of life and death…

This is a very different kind of drama, with the entire dark setup, and it isn’t really my type of drama. I watched the first two episodes and really didn’t like it, but suddenly this grew on me, and I guess my mind became wicked as well. It deals with crazy stories, not those weak ones like Romeo and Juliet, but hardcore ones if you ask me, the ones that our society doesn’t agree on. Anyhow, all scenarios are unpredictable which is nice, also the endings of every story, as well as the last story.
One thing was bothering me though: the students really don't give any f*** for their classmate, like he said that he has a braintumor, they laugh at him.. what's with that!?
So: good drama, but not really a happy one.