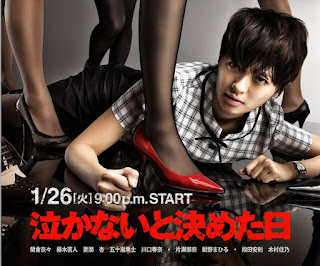 Tsunoda Miki (Eikura Nana) just finished college, and was lucky enough to get hired in a big firm. Her younger sister has a leg injury, and has to get surgery because of it, so this job will help her pay the hospital bills. Together as a newbie is Tachibana Marika (Anne), with whom she befriends instantly. She even finds an office romance with Nakahara Shota (Kaname Jun), who fell for her sweet personality. Life couldn’t get better, except life isn’t as easy as it seems. Due to minor mistake, and jealousy from Marika, Miki becomes a target for severe bulling where she once almost lost her life. But instead of running away she decides to stay and deal with it…

When it started I liked it, a lot, but it suddenly became too ‘goody-goody’. Like suddenly even the wrongdoers, who almost killed the lead twice AND was probably a good reason for another time where the lead actress tried to kill herself, were forgiven and, which was the worst part, got what she wanted. I mean, I know it’s a drama, but honestly, it’s not that realistic. There is no way in hell one would forgive that, heck not only forgive, but just live with people like that, second even if she were able to do so, why would they? I mean its bull… Watch it if you like the theme bulling, and have some weird dream about it being able to solve itself with “the goodwill of one’s heart” (sarcastic)… Make me annoyed…