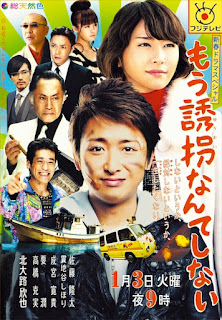 
After being fired from his latest job and thrown out by his landlord, Tarui Shoutaro (Ohno Satoshi) still can’t let go of his dream of becoming a superhero. At the age of 29 he still can’t let go of his cartoon-figures and goes crazy when he sees rare items, not to mention the level of seriousness he has when his favorite characters are discussed.
When he meets his senpai Koumoto (Sato Ryuta) he gets a job, so that he can pay rent, as a ‘mobile’ sweet potato seller, driving a van while selling them. On his rute he happens to see a rare poster, and runs to the store to get it, where he stumbles upon a girl (Aragaki Yui) who runs away from ‘bad people’. Shoutaro helps her, only to find out that she is Hanazono Erika, the second daughter of the yakuza clan Hanazono. After a disagreement, Shoutaro involuntary drives her to her desired place, where he almost is arrested. Wanting to give her a piece of his mind, he waits for her only yo hear her reason for being persistent, and being nice as he is, offers to help. Something she decides to take; she asks him to kidnap her.

I liked it, surprisingly. Even though I watched it because of Ohno I have to admit that the storyline most defiantly isn’t my style at all, but watching it, damn it’s pretty good. I guessed the criminal almost immediately, but I had no clue what so ever how. And the comedy part was actually funny, like exactly for this drama, I enjoyed it.  The special appearances of Sakurai Sho and Matsumoto Jun were fun, but only if you watched “Nazetoki wa Dinner no Ato de” and “Lucky Seven”, which I did, hihi..
Anyhow, its actually recommendable, this cast is perfect, and it’s hard not to like it when you know all actors and actresses. I mean they do the acting pretty neatly, sort a wish it was a drama instead of a special…