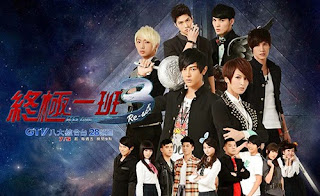 This series is a spin-off of season 2, following the same characters, but is the “real” storyline.
With the timeline and KO ranking restored and reset, Wang Da Dong (Jiro Wang) is sent undercover, to investigate a sudden change and rise in the KO ranking, in the current KO One class. Rumors have it that a certain pill is being sold and exchanged from the class which allows a spike in fighting power, so Da Dong is to go undercover as a 28-year-old dropout, repeating the final year. In school, he meets the notorious King (Pets Tseng), known as KO 3, whom he challenges for the spot as the class leader. While trying to establish authority, new transfer students try and do the same but with a different objective. Soon enough more and more mysterious things start to happen, and Da Dong is right in the middle of it all…

Compared to the last season this one is way better. They fixed a lot – like keeping Jiro till the very end – and of course and upgrade in story and acting. Two more members of SpeXial joins the group, one of them being Lou Hong Zheng whom I remember from K.O. 3an Guo – and adored. So, the quality of acting kind of evolved. What is amazing is that the group has grown on me, which I didn’t really think they would. This meant that every time I saw anything that reminded me of the last series, I laughed, rolled my eyes and enjoyed the ‘fan service’. Another thing that made me like this drama is the length – 20 episodes felt just right. Even though it had a lot of those typical fillers, the drama was okay to watch – even emotional sometimes. Pets is awesome as usual – officially my girl crush, and De Xiu is just perfect in this. Jiro looks younger (?), I can’t really explain how and why I feel this, but even with the new idols around him he does not look older. Might be the acting, or his personality, but yeah, I wouldn’t give him more than 20-25 years.
So: all in all, a funny and entertaining 3rd instalment of the drama – now to the next!