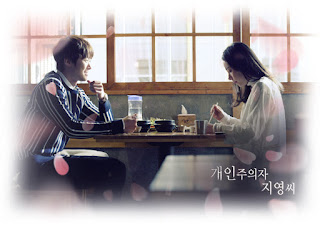 Na Ji Young (Min Hyo Rin) dislikes people and likes being alone. Or that is what she says. In real life she is lonely, but is afraid to get hurt, so she distances herself from everyone, as much as possible. Even in relationships she has a distance, making sure she won’t get emotionally invested.
Park Byuk Soo (Gong Myung) is the complete opposite. He has a lot of friends and is always in a relationship, with all his emotions invested. He is afraid about being alone, so all his efforts go to being everyone’s friend. Unfortunately, that makes him ‘easy’ and ‘annoying’ to everyone around him.
Being neighbors they both never really talked, until one day when they both meet in the hallway while breaking up with their partners. Soon the two get more and more involved in each other lives, and soon they become more than just neighbors…

This being a 2 episodes special, I have been trying not to spoil much, but I hope I got the essence of it.
I like this special a lot – it had so much soul, storytelling and character development, in just 2 hours. I was sad when I found out it was a special, but I think that is the magic of it – every scene was filled with ‘actual human emotions’ and not over-dramatized acting and storytelling. I was pleasantly surprised and I think I found a gem!
To sum up: an emotional drama – with more seriousness than comedy.