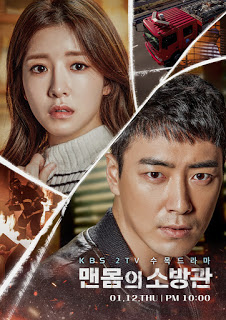 Kang Chul Soo (Lee Joon Hyuk) is a firefighter known for his short temper and “don’t-care”-attitude towards the responsibilities of his job. But due to need of money he continues his job. His life takes a drastic turn when his mentor and hero Jang Gwang Ho (Lee Won Jong) collapses in front of him. Gwang Jong is soon forced to retire as he is diagnosed with an illness. Since they aren’t financially wealthy, the surgery that could possibly save his life, is out of reach. Knowing this fact Chul Soo tries to find a way to earn a lot of money, fast. Oh Sung Jin (Park Hoon), Chul Soos childhood friend, tells him about a job where he can earn 10.000$ in one week as a model, but he there is a catch: he has to go nude!
Han Jin Ah (Jung In Sun) is a wealthy heiress living as an artist. As a little girl, she lost both parents in a robbery where the house got burned down. She survived but has anxiety and is unable to remember the faithful night, except for a scar on the lower back of the assailant. So, she decides to hire men to model at the right age, so she can find the man she remembers, and bring justice to what he has done. But little does she know, the two have met before, and as it seems they were both affected by the same incident…

Considering this is a four-episode long drama, they managed to fill it up with a decent storyline. While watching, I had a point where I was glad it didn’t have more episodes, as I felt it would have been a draggy melodrama. But they managed to fill it up, so that there weren’t any unnecessary scenes, or dialogues. Almost felt like a movie, though not close to the standard. The cast was okay, though at times they left me unimpressed most of the time. The characters felt dry and dull, even though they had nice background stories. The only great acting is from Lee Won Jong, but his screen time is 15 min tops.
All this doesn’t ruin the overall suspense or storyline of the drama, so to sum up: a okay drama with an interesting plot.

Kamji’s Verdict
This was like the best four episodes squeezed out of 16 episode drama. It kept a good pace and wasn't draggy at all. Of course it would have been nice to see some more in depth character development and side plots, but I think this was sufficient. I'm already looking for more dramas by Lee Joon Hyuk, I remember him as the good prosecutor in City Hunter and how sad it was that he didn't have more dramas. Jung In Sun was a very suprising actress, the first scene I thought to myself how bad and stiff she was, but as soon as I was thinking that, she suddenly changed in my eyes, and I started to look for her more throughout the drama! By the end I was mesmerized by her, I sincerely hope that this project would be a stepping stone for her, so she could shine more in future projects. All in all, I loved it, and with no spoiler, I would like to say that my heart wasn’t strong enough for that plot twist in the end.