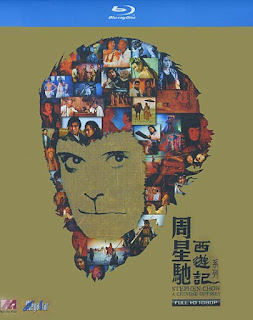 After opening the Pandora’s Box and traveling back in time, Joker (Stephen Chow) has lost the Box to Zixia (Athena Chu) an immortal fairy. After becoming her servant, he by accident removes her sword out of its scabbard, and the fairy falls in love with him due to her promise to marry the one that pulls it out. Joker on the other hand refuses to accept his fate to become the Monkey King as he only wants the Box back so he can save Bak Jing Jing (Karen Mok). Him refusing her makes her leave him – with a broken heart.
In the past, he manages to interrupt Guan Yin’s judgment by saving his master (Law Kar Ying), and unfortunately send him through time. Now with no Box he tries to hide from the upcoming storm, and meets the Longevity Monk again – who has been travelling through time. Unfortunately, he has lost Pandora’s Box, and they get caught by the Bull King, also a demon, wanting to become immortal by eating the Monk. Now Joker needs to save himself so he can find the Box, but can he defy his fate of becoming the Monkey King?

This second part is a direct continuance from the first movie. The difference is that it introduces new characters, and focuses a bit more on the overall story rather than the characters. Not that it is a bad thing, but the characters become second to the story, which the first movie didn’t do. Though it felt more like a movie rather than an introduction. So, it progressed as a chronological story.
I did not mention in the other review about the acting as I didn’t know whether their acting was bad or good, due to the comedy and weirdness of the movie. But seeing this one I realized the acting was quite good. Even though the subtitles I had for the movie were horrible, I understood each character because of their movements. They were acting with their entire bodies! This made me enjoy the acting more.
The bad part of this movie which I didn’t notice in the first (I rarely notice things though), was the wires. I noticed the wires used to pull the actors in the air. The ones they use when the actors are supposed to jump really high (superpowers) or fly (again superpowers). It’s only a little part of the movie though, but still it made me facepalm myself.
So all in all: a funny and well-acted movie, with few technical issues.