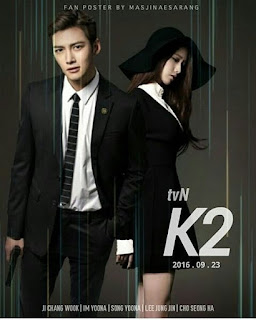 Kim Je Ha (Ji Chang Wook) is a former mercenary soldier for the PMC Blackstone. While in Iraq, he gets framed for the murder of his lover, a civilian. As a result, he runs away and becomes a fugitive. He returns to South Korea and by chance, gets offered to work as a bodyguard by Choi Yoo Jin (Song Yoon Ah), the owner of JSS Security Company and wife of the presidential candidate, Jang Se Joon (Jo Sung Ha). He accepts the job in exchange for resources that he needs in order to get his revenge on another presidential candidate, Park Kwan Soo (Kim Kap Soo), who previously ordered the killing of his lover. In the meantime, Kim Je Ha gets assigned to guard Go Anna (Im Yoon Ah), the hidden daughter of Jang Se Joon, whose life is always threatened because of Choi Yoo Jin, her stepmother.

Yes, ladies and gentleman, Ji Chang Wook is back, with nothing less than quality acting with a sprinkle load of hotness. I’ll guide you through why you should watch this. First of all if you have watched Healer (another Ji Chang Wook Gem) you’ll know that his action scenes are professional, and apparently he stepped up his game in this drama, so expect some moves :b. Secondly: do I really need to say more? Yes, as you can read I am too biased on the actor to actually write a helpful review. At first I really didn’t want Ji Chang Wook, to team up with an idol-turned-actress, it’s not that’s she’s bad but she’s not good either. However, the villain in this story, Choi Yoo Jin, portrayed by Song Yoon Ah, really took the audience by storm. Her acting was crazy, at one time I literally got chilled put by her. She was really impressive, she even took the spotlight from JCW when in the same scene (yes, that’s how crazy good she was). The storyline was okay, it became a little dull at times, and the romance was a little too much at times, but the suspense and political game kept it up. To conclude: JCW Fighting ♥