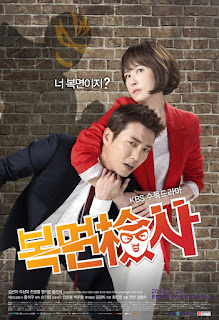 Ha Dae Chul (Joo Sang Wook) is a corrupt prosecutor willing to look through things if he is payed for it. This makes him butt heads with Yoo Min Hee (Kim Sun Ah), a detective working on cases involving criminals Dae Chul is supposed to be prosecuting. But little does she know is that Dae Chul is a masked vigilante, making criminals confess and sends them to the police station. The truth is Dae Chul used to train wrestling at Min Hee’s Uncles gym, where he learned to wrestle to impress Min Hee. Then he meets his real father who tells him about his mother and how she betrayed him and Dae Chul to live a richer life with his father’s best friend.
This makes Dae Chul seek revenge by becoming a prosecutor, but due to his honest personality can’t let criminals go, so he becomes the masked prosecutor to bring them to justice…

Of all the Korean dramas, out there I was expecting (hoping) this would be more like the Japanese types of drama, and it does have all the elements, but Koreans just take themselves way to serious for it to be a funny and moral story. I understand what they were trying to do, and since they couldn’t keep it to the ‘masked vigilante prosecutor’ they tried to add another plot in the plot, making it more of 3 plot type of drama, all in one. Of course, as all other Korean dramas they have loads of sub plots, but they kind of die off, as well as the actual cases in police and prosecutor offices. I was expecting a light drama, but somehow ended up with another wannabe light version of makjang. I dunno why Koreans love birth secrets and revenge so much…
Anyways, the cast was fun, and to be fair I had a few laughs here and there, but else this drama is not really one of my favorites – even if I must say it grew on me.
So, all in all, an okay drama that I don’t think I wouldn’t recommend.