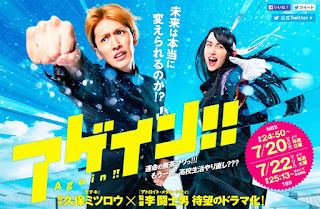 Imamura Kinichiro (Fuji Ryuseii) is high school senior with absolutely nothing to aspire to, and full of regrets for not being able to have great memories during his high school life. On the day of his graduation he by accident falls down some stairs together with Fujieda Akira (Okano Maya), and wakes up 3 years in the past, on the day of his freshman year of high school. Believing he can change his past, he decides to look for the one person he had been wanting to ask one question, all through his high school life. But when he finds out that the girl, Usami Yoshiko (Hayami Akari), he had remembered as someone he looked up to, is member of the cheer squad, he decides to find out what had made him look up to her in the past. At the same time, he and Akira try to find out why and how they ended up in the past…

This is one of those Japanese dramas that are lighthearted and funny, yet can bring forth a good message at the end. Even though the drama has many, maybe too many, silly points, the drama as a general is fun to watch is interesting. Though I must say I was at one point bored and annoyed, but that is a personal preference with these dramas, where I prefer the supporting actress with the lead. I know a lot of time I have it the opposite way, but the lead actress in this drama was unlikeable to say the least.
As a fan of time travel I will say this: the idea was quite intriguing. I didn’t understand how it happened but when it did I didn’t mind it. I was quite surprised by the idea of the means. Though if it had continued for more than 10 episodes I would have started questioning how and why, so thankfully it didn’t.
The acting was very b-rated and over the top, but still watchable.
So all in all, a fun and interesting drama, though not one of the great ones out there.