Love Me If You Dare Review 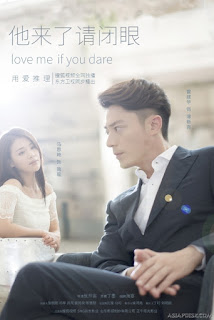 This drama is about the romantic relationship between a criminal psychologist, Professor Simon Bo, (Wallace Huo) and his assistant Jenny Jian, ( Ma Si Chun), while they work on solving some mysterious and violent criminal cases, based on the study of the wills, thoughts, intentions and reactions of criminals to resolve the cases. Simon Bo works as the analysts/advisor of the serious criminal cases in the police department. He lost his father at an early age and moved to the United States with his mother. He has a high IQ but low EQ, as he is not good in socializing. Jenny is deeply influenced by her father, a veteran police officer on criminal investigations who died on duty. She has a great sense of justice and very observant. She works as Simon's assistant and his translator who ends up helping Simon in the criminal investigation.

My first Chinese mainland drama in a looooong time. It wasn’t bad, but not good either. I guess you can say it’s in between. I only watched 2 episodes pr. Week. So I didn’t feel like I got too much of it, or tired from it, neither did it get me excited or looking forward to the upcoming episodes. Apparently, there was a big fuzz before the start and lot of people were looking forward to Wallace Huo’s return to the small screen, so this drama had attention from the beginning. Overall it felt like a bad imitation of NCSI, the cases were really bad, and the police force in China is so messy, I really couldn’t understand that part. The only interesting thing in this drama were the relationship between Wallace Huo and Ma Si Chun, there were not really that much romance, just a little bit to keep you in the seat. Although the interesting thing about them were that weird and psychopath aura around them. They were both really weird I guess, but in an exciting way :b. All in all…. I don’t know. In between !

I had seen this drama before as I was looking for something to watch, but didn’t want to watch since it wasn’t finished airing. When I did pick it up I really felt like I had found a good drama, though I was confused a lot of times. I am not very familiar with the Chinese actors/actresses besides the idol ones, so these actors in this one were all pretty new. I have to say the male lead, Wallace Huo is a darn good actor, but the female actress was a letdown ALL the time, and I really didn’t enjoy her on screen. It felt like one actor was trying real hard, but she just stood there awkwardly and tried to look pretty. Pretty annoying. The best friend was better at showing emotion than she was, so I was hoping those two would kick her off the team and make their own ‘kick-ass-crime-fighting-duo’-thing. I know mean, but seriously so many episodes with a dull face is just boring.
Besides that, I liked most parts; the real psychology and stories behind them, as well as the backstories. Though I found the involvement with America pretty unnecessary.
So recommendable? Yeah! Though just pretend you like the girl, worked for me.