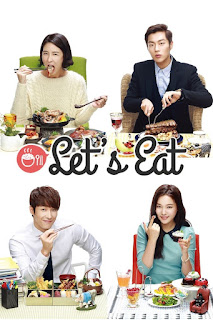 The drama focuses on the home and work life of our heroine Lee Soo Kyung (Lee Soo Kyung), a divorced woman in her early thirties who is content to live alone. The one thing she can’t quite reconcile is her abiding love of delicious food, and her inability to eat out alone. She’s a foodie who enjoys trying every new restaurant under the sun, and avidly follows food blogs to feed her ever-growing appetite. Her favorite is a strange blog called ‘Let’s Eat’ that only uploads photos of empty dishes—a sign that a place has to be scrape-your-plate-clean delicious in order to be worthy of a post. Her next-door neighbor to the left is Gu Dae Young (Yoon Doo Joon), a smooth-talking man in his late twenties who tramps around in sweats most of the time, and can be overheard telling a different girl each day that he’s two minutes away from wherever he’s supposed to meet her, even though he’s still standing in his hallway. Basically, Soo Kyung’s first impression of him is that he’s a liar and a playboy.

Warning: Do not watch this drama while hungry, DO NOT! It’s torturing if you’re hungry, and it will make you hungry if you’re full. Solution: watch while eating. You could mostly call Let’s Eat a slice-of-life drama about our heroine, and by extension the three neighbors who share a hallway. You could also call the show a commercial in drama clothing. The food sequences that were featured in every episode were highly indulgent, and often felt like we were taking a legitimate commercial break. What keeps it then, from becoming an extended food commercial, is a thoughtful tone and an earnest portrayal of characters who are consistent and well-rounded. I was pleasantly surprised by Yoon Doo-joon in this role. I think it helps that Dae Young is a quirky character, and a guy with a sunny disposition and a quick comeback for everything. He really has a lot of fun with the Angry Foodie segments—basically once every episode. He totally goes for the comedy, which made me like him. The romance wasn’t one that had scorching chemistry or even a great deal of development, but it was squarely in cute and fun territory.