Kill Me, Heal Me Review 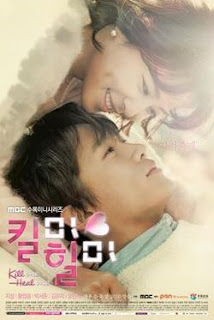 Cha Do Hyun (Ji Sung) is a wealthy businessman with a warmhearted personality who loves to help others. However, 11 years ago, after he realized that he suffers from dissociative identity disorder, he has been desperately trying to hide it from his families and friends. He has six other identities: Shin Se Gi a vehement guy with a devil-may-care demeanor who appears when Do-hyun experiences violence. He may be violent, but he never hurts children and women. Perry Park is a 40 year-old man with an aficionado for fishing and building bombs. Ahn Yo-seob a suicidal, intelligent 17 year old boy and artist. Ahn Yo-na's twin brother, she is an extrovert and mischievous 17 year old girl who loves idols. Cha Do Hyun tries to regain control over his life with the help of Oh Ri Jin, a first-year psychiatry resident who tries hard to maintain her seemingly perfect image to cover for her real personality. At first glance she looks elegant and genteel, but she is actually messy and short-tempered. Ri-jin then becomes Do Hyun's secret psychiatrist, and slowly falls in love with him. Ri Jin’s twin brother, Oh Ri Ohn, often gets mistaken for a goofy simpleton, but he is actually a famous mystery novelist under the pseudonym Omega who investigates about Seung Jin Family.

Oh God. Oh God. Oh God. I knew this would happen. I tried to prepare my heart and mind for the ending since episode 1, but then the ending came and I’m left alone with thousands feeling I don’t know what to do with. How do I go back to living my life again?  Where do I start… That couple. What kind of chemistry is that! First they overwhelmed me in their previous work Secret, and know they do it again, just stronger! Although Ji Sung did a lot of the work this time, I mean he singlehanded made me fall in love with SEVEN amazing characters with the same face! Before he was on my favorite list of actors, but now he is THE TOP ONE! No.. He need another list only for him, this man need an award already! Also Hwang Jung Eum did a pretty good job, she just nails those feels, and throw them at us so we just end up sobbing like her. Throughout the drama what I liked the most about them where that they don’t seek recognition or validation from anyone but each other, that’s all they need… That’s all I need(hahah). The storyline, the journey they go through to put back together the broken puzzle was just a delight to watch, even the message of the show, leaves us with no less than satisfication, that it’s energetic to depend on our loved ones, and to seek out the truth despite our fears.
Okay, so just to be fair I want to pin out a little detail that might have been a little too much in the drama, and that was the flashbacks! There were too many and too much, but I didn't think it would reduce from my experience as an audience. *happy face*
This dramas soundtrack is also an example of how much impact a song has on the drama, I dare to go as far to say that if not for one specific song in the drama I don’t think it would have been able to deliver everything the way it did.
After a rather-dull 2014, I must say 2015 kicked off with a loud bang. With dramas like Pinocchio and Healer concluding in the first two months, setting solid standards, it was rather difficult to surpass them. But Kill Me Heal Me did exactly that. I wouldn't say it exactly 'surpassed' them. More like it carried on their legacy.

Hmm, this drama was one of the few extremely popular ones of 2015, and yeah I was expectant. It is good, it just didn’t satisfy me. Actually I dislike dramas (and movies) where the lead actor/actress falls in love with a look-alike of the lead or a person reminding them of someone else (like someone falls in love with the lead that looks like his/hers first love, or like in this case: the same person but different personality). It just feels wrong, and already from episode 4 I was kind of annoyed - and that went on for another 16 episodes. And tbh I didn’t really feel the leads chemistry as I did in Secret, but I guess it’s kind of the idea - like so have her fall for both personalities. I dunno, I disliked it - Also I didn’t really fall (like most did) for the violent Se Gi like everyone else did, nor did I feel bad for him, which just shows that the director and screen writer didn’t do a good job.
Besides that the drama was okay. The psychological part was okay: quite reasonable actually, though I didn’t get why all personalities come out - only a few of them make sense, but then again it’s a drama.
I won’t spoil anymore, so a good and interesting drama - which you might like more than I did.