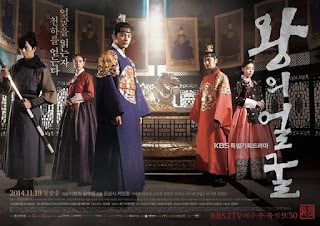 Face reading is an art in which by looking at a face; its form, condition, the skin, the shape and so on, it is possible to learn things like a person's characteristics, personality traits and innermost secrets, but also the possible future.
Before stepping on the throne the current King (Lee Sung Jae) was told by the royal face reader that if he ever were to become the King, Joseon would suffer and fall into despair. By luck he becomes the King, and soon after, Joseon falls into anguish with diseases killing the civilians and hunger striking the country.
Several years later, the King has four sons, all from concubines due to the Queen’s infertility. The two oldest are from the first concubine, who passed away, but the Queen took in as her own sons: Prince Imhae (Park Joo Hyung) and Prince Gwanghee (Seo In Guk). Due to his jealousy of his sons and fear that he would lose his position as the King, the King refuses to announce the Crown Prince even though the both princes expect Prince Imhae to be crowned. Though Prince Imhae is short tempered, he cares dearly for his younger brother, and protects him with all he has. Prince Gwanghee, fully devoted to brother and father, never even thought about taking the throne from any of them. But due to his complex about never getting the face of a King, the King’s jealousy strikes Prince Gwanghee the most, as he not only has every quality of a Crown Prince, but also the face of one.
When Prince Gwanghee is attacked in the royal library, he decides to seek out the culprit, and finds out that a rebel group called the ’Dedong society’ is behind it, the King sends out a royal command, having them all arrested. Little does Prince Gwanghee know that this decisive act ends him up in a struggle of political war, with not only him and the royal court, but also the future position of the King…

I was quite excited while watching this drama as I am Seo In Guk fan, but also the story is again of my favorite royal history. And they are almost completely true to the real life story, though as always a bit dramatized. I am fond of In Guk playing love stories as he is good at playing in love, but the screenwriters really made me dislike the lead couple, because of several reasons (not gonna tell them haha). I did feel they were in love, might also be the reason for my dislike, but it was really just annoying to watch. The more the writers tried to make it more tragic and more heartfelt, the more I hated the female lead (I think you understand who was tragic in the drama here). And the supposed second female lead, which by the way was one of my favorite characters in Korean period drama of all time, had so little screen time and influence in the kings eyes that she was less on screen that the royal eunuch – which by the way does not make any sense! (You’ll understand when you see the drama). On the other hand the political and war part was quite good, yet the last 2 episodes felt rushed (they are like spread in 7 years man - crazy).
The actors were good though, especially In Guk and Shin Sung Rok, though I found the female lead to be as typical as they come.
To sum up: a good drama with good content, but bad love story.