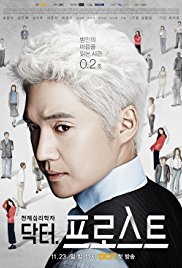 A psychological thriller about a professor (Song Chang Ui) in the field of psychology who are regarded as a genius, he cannot feel certain emotions due to an injury he sustained as a child. Yon Sung Ah (Jung Eun Chae) gets appointed as his assistant, and start counselling sessions at the university. Because of some mystery deaths, together they start solving crimes for the police department that leads to some psychological disorders. While they solve these crimes their past mysteries begins to surface.

I’m very interested in psychology, so this drama was like sent from heaven to me, and especially happy about that it was OCN that picked it up and not another broadcast company. OCN really knows how to make their original dramas. I really liked this drama, the suspense, mystery and the various psychology disorders that were shown, were all very interesting. I had to read about some of the diseases after every episodes. The only thing is that 10 episodes were just not enough! I felt like they started something but never really finished it, all the characters were incomplete, they all had interesting backgrounds, but they never really did anything about it. Although every OCN drama ends at a cliffhanger, you can’t do anything but anticipate a second season, (please! *crossing fingers*). The cast although didn’t really leave any impression, some of them were familiar but some were new faces for me. I don’t know what to think of Song Chang Ui, he did a good job with his "no-emotion" character as Dr. Frost, but I can't say that his acting was extraordinary. Sometimes he just can't convince me about Frost's coldness and emotionless. Let us not talk about Dr. Frosts assistant, I really didn’t like her. But all the other actors were good, especially the patients in all the cases in every episode. It’s a nice drama, it suits a nice rainy Sunday were you just want to be home.

Another OCN drama on the forget list. I am quite disappointed in these dramas lately, and it takes quite a lot of energy not to enjoy psychology crime dramas. I know I was upset about Reset, but I am also quite upset with Dr. Frost because of the same reason: it really is boring. I am a huge fan of psychological/behavior analysis dramas. So much that I actually started studying psychology on my own, and there is one thing I gotta say (as a psychology enthusiast): there is no way in hell so many unique mental disorders are in the same town/city, and let alone all be witnessed by the same physician. You might disagree and say that mental illnesses are quite common, more than we already know, and yes true, but the ones introduced in the drama are as rare as catching Ebola. I mean they are mainly textbook illnesses that do happen, but for few people spread out all over. Then again, it is a drama – and it has to be interesting I guess.
The actors were okay, not that they really were able to use their potential as this drama is written very weakly and the same goes to the screenplay. But they manage, and make it watchable to a degree in in with made me finish all 10 episodes. The drama as a whole was too slow and not that enjoyable.
All in all a okay/watchable drama, with decent actors – though bit boring plot.