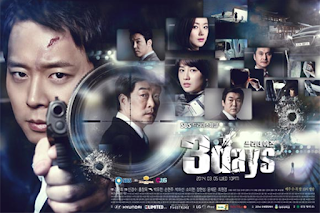 After being suspended for loosing focus while protecting the President (Son Hyun Joo), Han Tae Kyung (Park Yoo Chun) holds a funeral service for his father who had passed on that very day, which was also the reason for his loss of focus.  There he meets Yoon Bo Won (Park Ha Sun) a country police woman, who showed up to ask some follow –up questions on his father’s death. At first the questions seem normal, but as she continues, Tae Kyung notices that the ‘accident’ that resulted in his father’s death wasn’t as accidental as he thought.
As the evening continues he is involved in several weird situations which lead him to finding out about the most shocking fact: an attempt of assassination on the president. Hurrying to convey this news to his chief (Jang Hyun Sung.), he is caught up in a situation with the president missing and is accused of being responsible for it.
Now, on the run, he has to find the president before the end of the 72 hours since he went missing in order to not cause havoc amongst the public of South Korea, but also save him from the assassinator after him…

Sorry about the review being confusing, but you’ll have to watch it in order to understand it. And to be honest the story is much more than what I have written.
To start with I get why it’s called 3 days, but the story expands to much more than that. The general story is about the three days in which the assassination is planned – or in the three days where they are looking for the president – but it really is much more. I guess that is why I like it so much. It reminds me of the period dramas where the king is to be assassinated and he is confused at who to trust, except of course it is much harder to actually kill him (not just run into his room and kill him). And I love that the question that everyone else wonders is answered (this one: If you are the president, why are you so weak).
Besides that I like Yoo Chun and his acting – though I am not used to this kind of Yoo Chun. And I am in love with Park Ha Sun, which is tough work for a female actress to do (I really really really like her).
The storyline is also confusing and keeps you on your toes – kind of is nice to watch something that you are unsure how it’ll end.
To sum up: good drama with a good storyline.

Kamji’s Verdict:
Okay, lots of action, just too bad it was badly executed. I guess the budget were a little tight, because somehow I were mostly annoyed by those scenes than excited. it continues throughout the drama, I just keep noticing the errors. There were too many of those errors, for example, you see a person walking on a carpet, and another person inside a room in the other end of the corridor can hear his footsteps, which sound like he is walking on marble. On the one hand, it delivered what I needed it to and wrapped everything up with a happy ending without feeling unrealistic, so it definitely wasn’t unsuccessful.