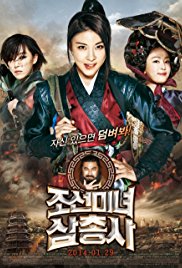 Joseon Dynasty’s top bounty hunters, the intelligent and talented martial arts swordwoman Jin Ok (Ha Ji Won), the housewife and fighter Hong Dan (Kang Ye Won), and the youngest of the trio: Gabi (Son Ga In). This trio never failed to capture a target, no matter the criminal. One day they get a mission from the king to search for a stauroscope that could protect Joseon, little did they know that a powerful group would do anything to prevent the king from finding it.

One of the best movies this year so far. I liked how funny and entertaining it was, while still having that twist of darkness and evil. You can say Ha Ji Won knows how to pick her projects, after acting out as a serious empress in Empress Ki, and then acting as an easygoing, little crazy girl, I have to say she did it with remarkably good results. It felt like two different persons. Not to forget the other two girls, who also contributed with amazingly fresh characters. As this being Son Ga Ins debut to the big screen, she should consider continue in this field, as she did a good job. To conclude this, I would like to recommend this movie to all of you.