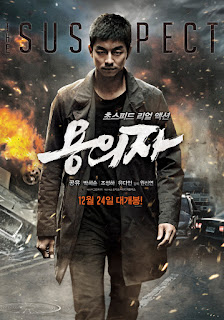 After being abandoned by his country ex-elite North Korean spy Ji Dong Chul (Gong Yoo) runs to China to find his wife and daughter, who have been sold, only to find their bodies. This leaves him determined to kill their murderer, but is unfortunately caught up in the murder of a North Korean defect eho was supposed to make a friendly visit to the North. This leads to him becoming South Koreans most wanted man. The man put on the case to catch him as the team leader for the operation, is ex-elite spy ‘catcher’ Min Se Hoon (Park Hee Soon) now a drill instructor due to not being able to catch Dong Chul before.
Choi Kyung Hee (Yoo Da In) is a former reporter, who lost her job when she came too close to national Intel, which didn’t keep her from continuing her search and eventually finding Dong Chul, as he is involved in higher National Security Intel. So she decides to help him, and uncover the truth, but for some reason Dong Chul is more interested in finding the murderer of his wife and child…

Hmm, I have had this movie on my computer for now an year, and that is only because of the one reason of it being a north-south conflict story. But besides that I REALLY found it good! I’ve said it before: Koreans know how to make good action dramas/movies, and this one is really well made. Gong Yoo does a great job, and lives up to being a “superstar”. I can’t really comment on the scenes because the more surprised you are while watching the better it becomes. So I’ll stop here and say a great watch!

Kamji’s Verict:
Wow, Korean knows how to make action movies. This movie was action packed from start to finish, exactly how this kind of film should be. I could finally watch this long awaited movie and was not disappointed. Gong Yoo's acting was top notch here and he definitely proved that he is very well suited to action roles. I thought much more emphasis was given to action and the car chasing scenes (which were brilliant I admit) rather than to interaction between people. The plot was good but not particularly original. I especially appreciated the interactions involving the spy chaser, Se Hoon (Hee Soon). He was an intelligent guy and a bit of a smart ass. I got a kick out of his no nonsense, not going to take any crap attitude. His banter with his associate was funny. I would recommend this movie to anyone who likes fast paced, intelligent action films. This one had thrilling action and a good story to back it up. I was glued to the screen the whole time and loved the suspense.