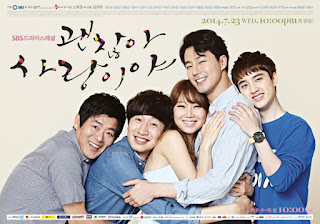 On his birthday bestselling author Jang Jae Yeols (Jo In Sung) older brother is released from prison for the murder of their father. While celebrating, Jae Yeol doesn’t notice his brother’s arrival; his brother walks up and stabs him in the shoulder several times. At the trial Jae Yeol begs for a reduced charge as he has forgiven his brother, though his brother swears when he gets out he’ll kill him.
Few years later Jae Yeol started writing crime novels instead of the usual romance novels, which has made one of his loyal fans Ji Hae Soo (Gong Hyo Jin) dislike him. Hae Soo is a physicist at the psychic ward at a hospital, and works with patients from all kinds of mental illnesses. She herself has anxiety: she is afraid of any form of romantic skin ship. The two meet for the first time in a show which discusses the psychological situation in Jae Yeols new crime book. And this makes Jae Yeol interested in Hae Soo, though the interest isn’t requited.
They meet again when Jae Yeol moves into the house where Hae Soo lives, which surprisingly is the house he owns, and the hospital as well. Soon the two start to fall for another, but things are weird with Jae Yeol as he seems to have some issues that go beyond the physical…

Sorry for the crappy summary, it is better than what I make it to be L
This is by far one of the best, if not the best drama, of the year! It has everything a drama from 2014 has to have and much more. The clichés are almost not there and it’s really innovative: from the characters and the storyline all the way to the screenplay. I love it; I think I still can’t get over it.
From the beginning to the end, every single minute is entertaining, and so is every side story. I even liked the OST! Not a single thing is bad, except for the fact that my standards for a good drama has risen by a lot.
All in all not only recommendable, but also a must watch!


Ah, I still can’t get over this drama. It was perfect in every possible way. It may sound as an exaggeration, but while watching it, you don’t have one negative thought about it, you just silently wish this drama would never end. It had its moments, sometimes you would smile, laugh, cry and even curse, (I curse when I suddenly realize something, I didn’t before, and that happened a lot in this drama, it took me by surprise over and over). So I agree with Bunji, when she called it the best drama of 2014 so far. I'm going to start looking for a man like Jang Jae Yeol.

Haha love leading your comments :D I'll watch this one for sure ;) notify me if you stumble upon more must watch type of dramas <3 // Asii

Mental diseases are often treated like taboo subjects. People are hiding them and avoiding talking openly about it. The rate of people affected by mental sickness is huge, and they tend not to get proper help because often aren't aware of their condition, or they often associate the mental care with crazy people who are hospitalized against their own will. This is why I LOVE this drama. Mainly because the focus is to spread the awareness of how common mental illnesses are. And that they all have a trigger to them. Almost all the actors are facing some difficulties with triggers from their past. The main actress is a psychiatrist, which gives us a very good overview of various types of illness the patients have in the mental hospital.

And just to add, that this drama came in handy, at the right time, the right place. Since I've lately been encountering a lot of people with mental illnesses and trauma. I really really really found it very helpful. And I feel it has enhanced my understanding of people with mental illnesses. I am more than ever convinced to treat mental illness as the way I would treat a person with a physical illness.
I really highly recommend this drama! If you are looking for a serious, more adult kind of drama with new fresh content, This is the real deal! It's such a strong topic and great plot. Left me speechless and happy! That's all I got to say! :) * HAPPY - WATCHING * // Asii