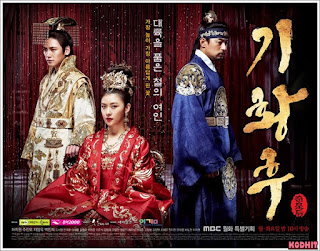 Goryeo, the former korea, was politacillay and economically governed by the Yuan. A big and powerful kingdom, which was ruled by an emperor. For over decades the Yuan have been kidnapping girls from Goryeo to be concubines in their palaces, in one of these quests Ki Seung-Nyang (Ha Ji Won), a goryeo girl, was captured alongside her mother. While the goryeo king tried to save her, her mother was killed by the yuan soldiers, leaving her with hatred towards them.  Years later she started to work for the Goreo King, and so they gave her a mission to protect Yuans Crown Prince. Despite her hatred towards Yuan, her loyalty for Goryeo was stronger, so she carried out the mission with all she got, protecting him was not easy.
Unfortunately the Yuan deceived her and brought her back to their palace as a concubine, she started out as a palace maid, and worked her way through until she married the Emperor (The crown prince she once protected) to become an Empress, this is a story about her loves and political ambitions as she is torn between the two nations.

At first I really didn’t wanna watch this drama, because of the number of episodes. I ususally do watch dramas with 50+ episodes, but those are family, easy-to-watch dramas. This was a historical drama, and there weren’t a good summery of it, so I really didn’t know what I was expecting. The only reason I started was.. dum dum badum tss… JI CHANG WOOK. Yup, I’m obsessed by his acting, and he was my driving force until the ending. He amused me, made me cry, at some point I even got scary of him, all this just proves his acting abilities.
Back to the drama, I think because I wasn’t expecting anything I fell easily in love with it. The story was good, and it was really realistic, the drama sucked you into its own universe and spit you out again leaving you as an emotionally wreck.
Another thing I really loved about this drama, was all the colors, I know it sounds weird, but if you’re used to the normal joseon, or mid 1900 historical dramas, you get used to boring colors (brown, grey, black), but this was packed with so many colors it literally bombed your mind, all the Yuan dresses and their decorations… woah.
All in all, you should give this drama a chance !

Hello. This is A.K.I.A. Talking…
Thanks for the great review of Empress Ki! I enjoyed it a lot.
I added it to my collection of reviews for the show. The show has now an average score of 82%.
Here is a link to the page if you would like to give it a look:
http://www.akiatalking.com/2014/12/empress-ki-2013-db-ratingsreviews-page.html
Thanks again for the review.