You Who Came From the Stars Review 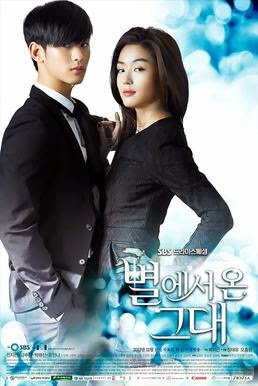 Chun Song Yi (Jun Ji Hyun) is a top actress who has got it all and it ruling movies, dramas, commercials and all. But she has got the attitude as well. She considers herself the best, a queen of entertainment. However things are about to change when she is accused of murder and soon she will have to show another side of herself. Destiny has quite a lot to offer, amongst which is Do Min Joon (Kim Soo Hyun), a quite unusual guy, who does not pay much attention to her, except when he finally figures out that she is the same girl he met 400 years ago reincarnated, when he landed on planet earth. With his special powers, Min Joon will try to help her get back on her feet but it won't be easy with all the secrets surrounding the mysterious murder, committed by someone closer to them than they know.

This drama is not my style and my style in one. Its the comedy I enjoy and the sci-fi I hate. It was hilarious but I could not wait to get over with it because the love story and the alien stuff was killing me. Usually with sci-fi dramas I somehow try to make it all seem real, but they make it so bad that it makes no sense and then that love story is a killer with the back and forth and all the other people bugging the main couple. Basicly the only thing I liked was the comedy. So if you dont really mind the sci-fi maybe this drama is just for you. It was cool a lot of times but I had a too hard time finishing it.