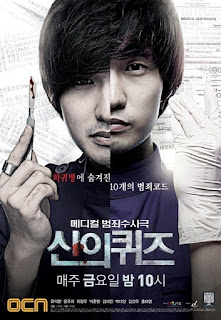 “The problems that you have to solve through each case are like a quiz from God. Quizzes made so that the arrogant human won't become too proud. God made it for that purpose. But in these quizzes, God made it for that purpose. But in these quizzes, there are no hints in it. It is a question that you have to solve forever” (Intro).
Han Jin Woo (Ryu Duk Hwan) is a famous ‘genius’ doctor, known for his young age and being able to almost do any medical treatment without fail. After spending a lot of time in a hospital he finally gets his wish granted in getting to work in clinical pathology. But as it seems his boss has a different plan: he assigns him as the consulting doctor for a team of medical examiners. The team focuses on mysterious deaths, so it is a collaboration team with the police. Kang Kyung Hee (Yoon Joo Hee) is the assigned detective in this case, and is partnered up with Jin Woo, but the two are complete opposites. Together they investigate various mystery deaths…

I’m kind of surprised that I missed this one: I usually have this idea that I have watched all the good dramas. But to then again, it’s OCN - and yes they do have the best Korean crime dramas. The first thing that struck me was the visibility of the autopsies. Being a CSI fan I am kind of surprised to see these organs being cut out and split in pieces. Though it freaks you out, you get used to it, and it gives you an idea of the reality of autopsies which I by the way never saw like that. The drama generally is interesting and the cases are shocking but yet kind of heartfelt - shakes you up, which I think is the meaning of it: “Changing society” kind of feel. The couple has a pretty neat chemirty and work very well together, though I don’t know any of the actors.
All in all recommendable.