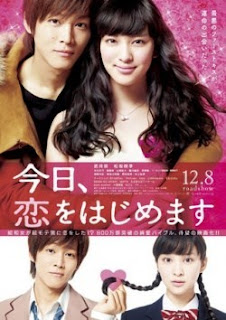 Hibino Tsubaki (Takei Emi) is a plain girl that doesn’t like to get attention from anyone. That all changes when she starts her first day of school by getting noticed, by the schools no 1 hottie: Tsubaki Kyota (Matsuzaka). Having the same name, both noticed each other, and they both end up sitting next to one another due to that same reason. Disliking his unserious personality and his playboy attitude, she hates being around him, which makes her gets teased by the rest of the class since everyone adores him. He makes fun of her, and ends up kissing her in class, much to Hibinos disgust. This leads to her becoming the class president, without wanting to be it. Kyota uses the situation by making her ask him out, just to tease her. After the best date Hibino has ever had, Kyota tells her that he will give up on her, since she really doesn’t seem interested in him, which unfortunately isn’t true, as she had fallen in love with him…

Okay, out of all the Japanese high school love stories this one is the best one made, and the couple really is beyond adorable! The storyline is very cliché-ish but somehow it has its own innocent flavor. Though the flow is pretty much typical, the story kind of is good. I think I’m starting to understand why people are annoyed at these girl stories. Yes, they are good, but damn they are typical. I think the only part that was missing was that the leads needed to get married or engaged, but else pretty much that. It’s like those American movies (Last Song, Note Book, Safe Haven etc.) that make you roll your eyes a bit, and even laugh like a teenaged girl, but somehow manage to keep you happy.
Do I recommend it? Sure, it really is okay to watch.