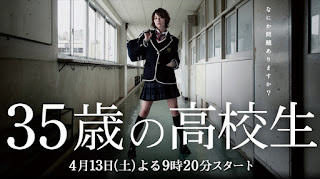 “High schools nowadays are like endless wastelands. Bullying, truancy, depression. It’s almost like trying to breathe underwater to deal with everyone. And not just for students. Teachers and parents find themselves having to apologize for their mistakes. There are very few rays of hope now. But, within this never ending darkness. Can the 35 year old high school student find something?” (Taken from intro of every episode).
Baba Ayako (Yonekura Ryoko) is a 35 year old high school dropout, who has been returned to the last year of high school. Little is known about her, except that she is rich and very smart, but yet she is returning to school. Here she takes things head on and learns about difference between schools then and now. The very class she is in has a heavy aura of domination two groups: “the popular ones” or also known as Team one. Basically they are able to do anything even while the teachers are looking due to the ‘School Caste’ - which ranks all students and teachers. Slowly the appearance of Baba shakes up Team One, and somehow gets to the core of the school system problems…

There is one theme/subject I really don’t like when it’s televised: bullying. I usually try to avoid those dramas, I mean when the theme is the main focus, and most school dramas have this theme in the storyline, but they are usually short. In this drama, bullying is pretty much in every episode, even though other subjects are mentioned; bullying is in all of them. When I started this, I cried in the very first episode, like seriously, so you might just understand the severity, but as the episodes continued, it just became, I don’t know, too focused on Baba. And the ‘bad guys’ sort of turned tables too sudden, or I don’t know, it became kind of as if I didn’t believe them… BTW, Mizobata Junpei was so amazing, I really was edgy in that one scene.. Lol.. okay no spoiling.
It’s a good school drama that focus on interesting subjects, and yes its harsh too.