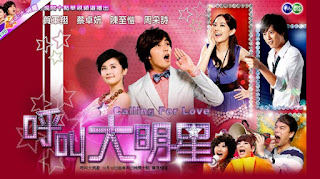 Chen De Xing (Charlene Choi) left Hong Kong after her mother’s death in order to find her father, whom she had never met before. She doesn’t know his name either, and her only lead is a picture that is at least 25 yers old, but she is still optimistic and gets a job as a taxi driver. Her life is turned upside down when the super idol Bo Ye (Mike He) returns to Taiwan, and she winds up with his fans. Things heat up when she does a mistake and takes pictures of Bo Ye, infuriating him and his manager.
Bo Ye is known to be a star, but due to his father indebting him, his sister going to arts school, he became an idol, which he resents. When he’s finally able to pay it back, more debt seems to come up; his manager borrowed money from mafia, his best friends restaurant is not going so well, and his sister needs to go to Paris to continue her education. All this leads him considering going back to the job he hates, until he buys a lottery ticket and actually wins! But unfortunately he put the ticket in a book, which he had mixed up with De Xing! Now he has to get it back from her, without telling her about the winning price, 300 mio…

Yeah, I get why it didn’t become popular as Mike He’s drama usually are, it’s really not that good. The actual highlights of this drama are the cute interactions, which are rare, like RARE for a TW drama. The drama has the baseline that he has to make her fall in love with him so that he can get the money, but he falls in love with her; that’s a pretty good baseline, except the drama is thin as paper. The characters don’t do the actors justice, even though they aren’t that good actors, somehow it becomes boring, and 14 episodes feel like forever. I don’t mind push and pull as long as it’s done classy, which this is not even worth mentioning. I bet the director doesn’t even understand the concept of push and pull. On the other hand, you can watch it without the annoyance that most dramas like this have…