Sound of You Heart Review 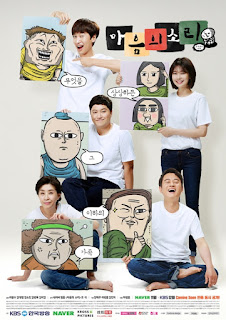 Jo Suk (Lee Kwang Soo) is the youngest of Jo kids, and he is living at home working as a comic artist. Unfortunately, he didn't get a breakthrough nor does he have a steady income. His older brother Jo Joon (Kim Dae Myung) works as a salaryman, and enjoys most nights at the club. His mother Kwon Jung Kwon (Kim Mi Kyung) is a stay at home mom, but has a clear mindset when it comes to money. His father Jo Chul Wang (Kim Byung Ok) is completely different in the sense that he is useless when it comes to work, and occasionally takes on jobs such as extra in movies – though he is really bad at it.
This drama is about the crazy and clumsy family, their everyday life and occasionally preposterous situations which they seem to be attracting...

I don't really know what to say about this expect it is so funny – on a ridiculous and nonsense kind of way. I can't say that I felt any storyline, or rather you could watch any episode in any order, and not feel any different or lose any context. Acting was okay, and since there are so many cameos I don't really feel like rating the acting, as many of them are comedians and such, so beside the main family, the acting is kind of in the 'beginner' stage, making it alright/acceptable. Also, the drama being less serious, everything else seems to be under the 'mediocre' level, so it's rather acceptable – both the lacking progress in story and okay acting.
To sum up: a funny and frivolous drama, and quite alright if you feel stuffed with melodrama – nice break actually.