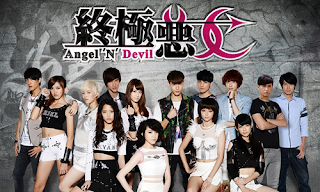 This story is the continuation of the Zhong Ji Series, but in the Copper Dimension.
Kate (Cosmos Lin), Yan Yan (Lucia Chen), Xiang Ning (Ting Liu), Allie (Allie Ji), Ding Dang (Sunnee Yang) and Xiao Yang (Cheng Yu Xi) are six high schoolers, living in the copper dimension. All sic have signed a contract with the guardian of light Xiong Ya (Teddy Chen) in exchange of one wish to come true. They fight the evils and demons, and protect the innocent at night.
One night while fighting a demon, Xiao Yang is attacked and dies as a result. The groups become bent of finding the killer, and soon meet Yin Xiao Feng (Sylvia Wang), who claims to be her younger sister.  At first the group is mistrusting, until they notice her fighting power. They decide to introduce her to the world, but Xiao Feng is reluctant to join. Wondering why her sister would sign a contract that would enable her to get harmed, for one wish, she questions Xiong Ya about it. She is told that her sisters wish is to keep Wang Cha Li (Simon Lian) out of danger and protect him. Soon she meets Cha Li, and finds out that he is Xiao Yangs boyfriend.
The two dislike each other at first, but when Xiao Feng signs the contract to find her sisters killer, the two find middle ground and decide to join forces…

Hmm, not sure of I got all it completely right with the summary, but I think most of it fits.
Continuing the series, this one has all the new actors from the Zhong Ji universe, though the characters are not the same. There is a small resemblance, but I think this series has the new cast in focus, mainly the A’N’D idol group. Though SpeXial is in it (and ends up taking more screen time than the girls), the main story is the girls and Sylvia Wang.
Considering its predecessors, this is a bit on the lower side of the bar, though the storyline is good. Unfortunately, there are too many fillers, and not a real guide for the new actors - they really are green. The ending was supposed to be epic, but was rather a headscratcher.  And the saddest part is that the stars in this one is Lou Hong Zheng, Huang Wei Jin and Chen De Xiu, though Sylvia Wang has moments.
All in all, a decent drama, but not that exciting - unless you really like the girl group A’N’D (and boyband SpeXial).