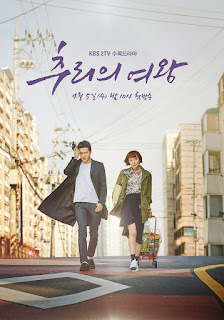 Yoo Seol Ok (Choi Gang Hee) is a housewife and the wife of a prosecutor. She dreamt of becoming a detective in order to solve the death of her parents, but decided to give it up when her husband promised her he would do that once he became a high profiled prosecutor. But doing deductions is something she loves, so she solves small cases like theft with the local police officer Hong Joon Oh (Lee Won Geun). All this she does behind the backs of her husband and mother-in-law. While solving a locker-theft case, she gets involved in a drug case, and soon she meets Ha Wan Seung (Kwon Sang Woo), a detective slightly keener to use his muscles rather than head. The two can’t get along at first, but when a case pulls them together, they find a middle ground and start working together…

I wasn’t expecting to watch this drama as they plot didn’t seem very appealing at first, but somehow, it’s addictive. Everything from the duos squabbling to the cat-and-mouse hiding game with the husband and mother-in-law, to the crimes: it just keeps you watching.
I am not really fond of Choi Gang Hees dramas (except Heart to Heart) as they’ve become stereotypical and the characters she plays are the same. Or at least the personalities of her characters seem the same – I don’t feel a difference. Kwon Sang Woo I haven’t seen in much, so I could guess he does an okay/average job, though I enjoyed him more than her. So, acting wise: a decent drama. The main storyline is okay, just not really rememberable – again typical. I bet in a few weeks I won’t even remember it.
To sum up: an okay drama with decent acting.