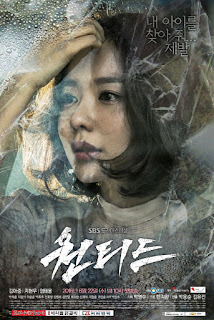 "Wanted" is a television program about a television program named "Wanted". In the course of this drama-within-a-drama, missions are assigned by some controlling intelligence, spawning an increasingly complex web of investigative reporting. In the course of these investigations, injustices are exposed. But the web of investigations is built upon "Wanted"'s purpose is the kidnapping and ransom of a child. Justice is embedded within a greater injustice.

I really do not understand why this drama had such low ratings. Amazing drama. Very complex and suspenseful. An adult drama for adults who don't mind having to work a little to understand or figure out what is going on. The script  was very well done! There are of course some minor oversights, but don't really matter. The cast was amazing, everybody fits perfectly in the role. It is a smart drama, no unnecessary things included. It was really well prepared. So far I haven’t seen Kim Ah Joong in a drama, but she didn’t dissappoint, I liked the fresh aura from her.

Okay, so this is such a weird drama, I don't even know where to start. These actors are amazing actors, but unfortunately, they were given such lacking characters and stupid dialogues, that the delivery becomes half assed. I don't understand why it had to be 16 episodes, and I don't understand what this director and writer were thinking while doing this. I bet even the actors were confused at some point, because hell, I was. The beginning is really good, and the storyline unfolds slowly, but at some point, it just became too much, and I felt like they had to add stuff in order to make it more interesting. It took me forever to finish, and if I wasn't as stubborn as I am while watching dramas, I don't believe I would have finished it.
To be fair, as I said before, the actors are really trying, but it just ends up seeming like average acting. I felt that a lot of characters were unnecessary, and their involvement with each other completely dumb. But the intensity is one of the few things that does make the drama watchable – also the hope of a sudden betterment in dialogue and story...
So: under average acting, with a somewhat okay story, but unless you are hooked, you might get bored. I know I wouldn't recommend it.