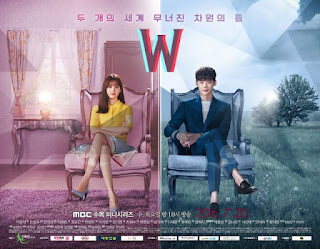 What is real and what is made up? In a bizarre blurring of truth and fiction, Oh Yeon Joo (Han Hyo Joo) is a second-year cardiothoracic resident doctor whose father mysteriously disappears one day. Oh Sung Moo (Kim Eui Sung) writes the most popular webtoon series known as “W,” but his assistant artist, Park Soo Bong (Lee Shi Un), is in a panic because Sung Moo disappears on the day before he is supposed to finish the final episode of the webtoon. When Yeon Joo goes into her father’s drawing room to investigate, an unexplainable thing happens. A bloodied hand appears out of a tablet screen and pulls Yeon Joo onto a rooftop where Kang Cheol (Lee Jong Suk) is bleeding from a stab wound. Yeon Joo ends up saving Kang Cheol’s life, only to realize after the incident that Cheol is the main character of her father’s webtoon! The next day, Sung Moo just as mysteriously returns and is intent on writing the final episode of the webtoon and once again tries to kill off Kang Cheol. But when Yeon Joo tries to talk her father out of ending the series, she finds herself sucked back into the world of Kang Cheol.

Such a weird plot. I was schocked when I realized the webtoon aspect in it. First time I read it, I was so excited, because I thought it was some kind of 2 dimensions, like two worlds on the same planet (sci-fi stuff). As soon as I realized it was a webtoon world, it just didn’t work with me. I applaud the new fresh idea into kdrama world, but somehow I found it unfathomable. However the way it was filmed, and the drawing-style overlapping, was really enjoyable.
Regarding the love story of this drama. There were NO chemistry at all! I’m not sure why everyone were all over it, but seriously they did not manage to capture the essence of a relationship. I don’t know how I can explain this without spoiling anything. The love line came out of nowhere, and it progressed so quickly into “I’ll die without you”-love, that it made me feel awkward watching it. All in all, maybe some people liked it because of the acting (which were good), and all the romantic kiss scenes (this should have the award for most kisses in a drama), but I couldn’t enjoy it.