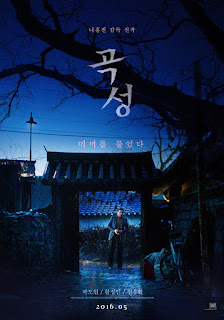 Jong Goo (Kwak Do Won) is small time police officer in the rural village Goksung. He lives there with his wife, mother-in-law and daughter Hyo Jin (Kim Hwan Hee). One morning he gets a phone call about a murder that has happened in that same village, and when arriving at the scene, he is met with the horrific sight of an entire family slaughtered. The killer, the father and head of the family, is sitting shaking and covered in burned spots all around his body. Soon another murder of the same type happens in the village, and it is said to be an outbreak of some sort.
Jong Goo starts hearing rumors around the village, about the ‘Japanese man’ who happened to come to the village when it all started. After checking out his house, Jong Goo and his partner are shocked to find Hyo Jin’s shoe in the house. And when he questions Hyo Jin, he noticed that the once shy and smiley girl is now swearing and threatening to murder everyone. The scared mother-in-law calls in a shaman to cure the daughter, but the paranoid Jong Goo believes the Japanese man has something to do with it and decides to take care of it…

I have a hard time deciding whether I like this movie or not. It has so much Asia in this that it became another one of those movies which I have no idea what happened. I mean it’s not hard to follow, they do keep you in the loop, but I don’t understand it. You would usually get a sense of what the meaning of a 2+ hours long movie is about, but at the end I felt empty. I wasn’t scared or shocked. I was a bit sad, but I have no idea what the movie theme is. Like if it was a scare movie, it was too well written, and if it was moral-type movie, I didn’t catch it. I don’t understand what I was watching. Maybe I am too thick? Considering people were talking so positively about it, I really don’t understand it.
The movie as a general is well-written, well-dialogued, and really beautifully made. The cast was great, and even the twist was good. Besides that, I have nothing. I really felt like a blob.