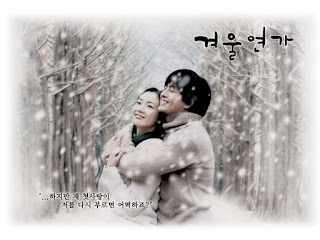 Jung Yoo Jin (Choi Ji Woo) is somewhat a dense yet smart girl. She lives life quite happily by being a member of the school’s radio broadcast as a host, and having a decent reputation in school. Her best friend Kim Sang Hyuk (Park Yong Ha) is also a co-host with her. Her life becomes even better when Kang Jun Sang (Bae Yong Jun) arrives, and she finds herself attracted to him. Jun Sang on the other hand has an interest in Sang Hyuks childhood and father at first, but soon falls for Yoo Jin and the two start dating. Everything changes when one night Jun Sang meets an accident and dies as a follow. This devastates Yoo Jin and makes the once happy girl, lose her smile.
Several years later Yoo Jin is engaged to Sang Hyuk, but is not completely over Jun Sang, even though she won’t say it out loud. On the day of her engagement party, she sees someone looking exactly like Jun Sang and starts running after him, but is unable to catch or find him. This results in her coming to the party too late, and leaves as strain on the relationship between her and Sang Hyuk.
A few days later, she meets the look-a-like whose name is Lee Min Hyung (Bae Yong Jun), and as fate will have it the two are unable to stay from one another…

There are several reasons I started this drama, but the main reason is that it is a classic in that everyone has either watched or heard of. I found out about this long time ago, but even then it was ‘an oldie’, so I never took the liberty to actually watch it. Though I enjoy old classics, I never felt compelled to watch this. So when I did start it was because I really wanted to watch a good ‘oldie’. I think I do understand the hype, 14 years ago: it has what most dramas didn’t have then; a decent storyline. Though amnesia, first love and all the typical clichés are involved, it wasn’t as clichés then – so I didn’t really mind it.
I know Ji Woo from other dramas, but this is my first time seeing ‘the legendary’ Bae Yong Jun. To be fair, he does look like a 90s romantic hero, but I found his acting mediocre – maybe because I am used to a bit more modern acting? I don’t know; only that I wasn’t all impressed.
So is it recommendable? If you are a drama lover like myself, and you like the old and cliché-kind of dramas – this is a most definite pick.