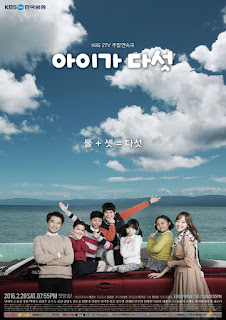 When it comes to families, is bigger better? Lee Sang Tae (Ahn Jae Wook) lives with his in-laws and has been raising his two children, Lee Soo (Kim Hyun Soo) and Lee Bin (Kwon Soo Jung), on his own ever since his wife passed away. He works as the marketing team leader for a fashion company. Ahn Mi Jung (So Yoo Jin) also works for the company as an assistant manager. She is raising her three children — Woo Young (Jung Yoon Suk), Woo Ri (Kwak Ji Hye) and Woo Joo (Choi Yoo Ri) — alone for the past three years after her husband had an affair with her friend and left her. But Mi Jung has been telling her kids that their father is just working in the United States over the past three years. As Sang Tae and Mi Jung deal with the daily demands of work, extended family and the needs of their children, life can get a little hectic.

For 6 month I have been so eager every weekend to tune in and watch the episodes. At first I started it, because I love family dramas, sometimes I feel like they teach us the small things we take for granted. But as the episodes went by, I felt I watched it only for the Sangmin- & Yeontae-Couple (Sung Hoon and Shin Hye Sun). The rest of the cast was alsogreat. Sang Tae's In-laws were annoying and overbearing at times but they were also one of the most interesting characters in the show. All the children were a delight to watch. In fact, the whole time you feel excited about the kids moving in together (one day) and being one big squad of siblings. Nevertheless I did enjoy the rest of the drama very much, it doesn't have any makjang and it's low on excessive melodrama. It's a nice family drama, almost has a slight slice-of-life feel to it.