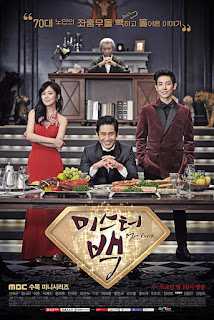 Choi Go Bang (Shin Ha Kyun) is a 70-year-old CEO of the business firm Dae Han. He lives with his younger brother who is the vice president, sister-in-law who only cares for position, younger sister who only cares about money and Go Bang's only son Choi Dae Han (Lee Joon) who doesn't care about the firm at all and has a reputation of sleeping around and spending money. Go Bang himself is an old geezer that only knows how to yell and preach. Eun Ha Soo (Jang Na Ra) is a bright woman who becomes an intern at Dae Han Company. After a misunderstanding, Go Bang fires Ha Soo, and ends up fighting with Dae Han.
Go Bang receives a pill from his doctor which is supposed to help his health, and when he gets into a car accident he reaches for the pill, but ends up swallowing something very different: a piece of meteor. After surviving the accident, he goes home, and while taking a bath comes out 40 years younger.
Unable to explain his sudden youth and afraid he would become a test subject, he decides to fake his own suicide and pretend to be his own bastard son called Choi Shin Hyung, as he refuses to let his son or siblings have his company. At the same time, he starts to feel something he has never felt before: love.

So this drama I watched because of Lee Joon, and I would never finish it if it wasn’t because of him. It is not a bad drama; I just don’t like these types of themes especially when there is no rea explanation about it. The cast was okay, I rather disliked Jang Na Ra in this one, no idea why exactly, but her character and the entire love story was boring. Shin Ha Kyun I don’t remember seeing anywhere, but he was okay, a bit too comedic, but still okay. I liked Choi Dae Han’s story the most, not only because it is Lee Joon, but I liked the growth of the character, even though the entire ‘I think I am in love with you girl’- is pretty old and boring.
I am not gonna spoil any more but the drama is funny, and well thought, but just not my cup of tea. So all in all a good drama, with decent acting.